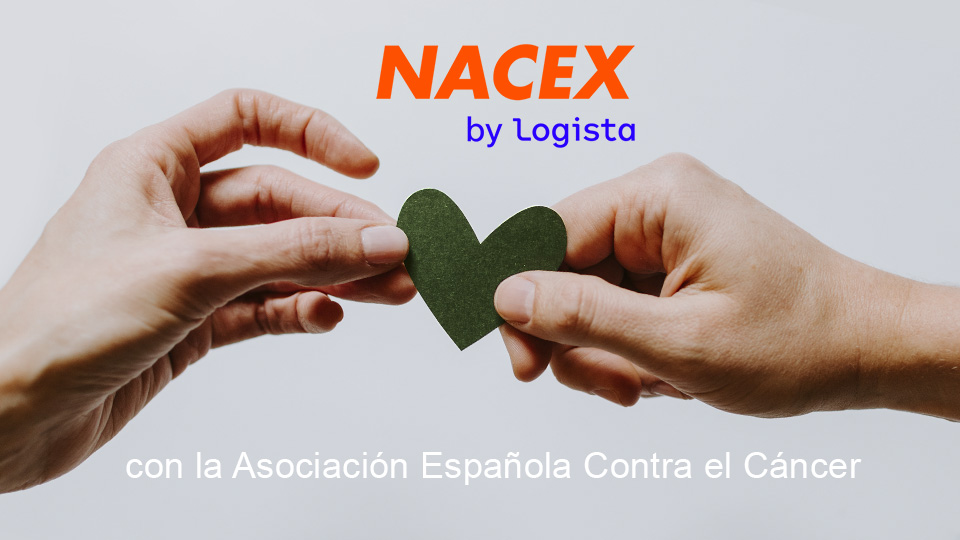 NACEX, Logista’s express parcel and documentation delivery company, has signed its first collaboration agreement with the Spanish Association Against Cancer (AECC), which is part of the company's commitment to health promotion and cancer research.

According to the agreement, signed between Manel Orihuela, General Director of NACEX, and the AECC, chaired by Mr. Ramon Reyes, NACEX will help to extend the campaign messages and activities undertaken by the Association to raise awareness about relevant aspects related to this disease. In addition, it will contribute in order to pull together to fight cancer on the basis of prevention, support for patients and families, and research.

Manel Orihuela, Managing Director of NACEX, is proud of the collaboration agreement: “We are very happy to announce this alliance, which is a new opportunity to continue protecting and promoting health in society as a whole and among our collaborators.”

Thanks to this collaboration, NACEX will organize a streaming event on its YouTube Channel (https://youtu.be/F7V_Ssf6p0c), on September the 30th from 4:00 p.m. to 5:00 p.m., with Olga Muñoz, Head of Physical Well-being and Dietitian-Nutritionist at the AECC, who will offer a talk on healthy lifestyle habits, to promote cancer prevention among its employees and in society in general.

Throughout its more than 26 years of history, NACEX has shown its firm commitment to improving its environment by collaborating with various social causes, many of which are aimed at health promotion and medical research. At present, the field of health has become even more relevant in the context of a healthcare crisis that has highlighted the difficulties that many people are going through.

Among other collaborations, NACEX has long supported the Josep Carreras Foundation, the Multiple Sclerosis Foundation, the Spanish Federation for Rare Diseases, Ronald McDonald House, and the ASDENT association’s fight against the rare Dent’s disease.

NACEX has a fleet of over 1,600 vehicles and more than 3,000 collaborators, as well as a network of 32 hubs, over 300 franchise offices in Spain, Portugal, and Andorra, and more than 2,200 NACEX.shop points in Spain and Portugal.

Logista is the leading distributor in Southern Europe. It regularly provides a service to over 250,000 points of sale in Spain, France, Italy, Portugal, and Poland, and facilitates the best and fastest access to the market for a wide range of convenience, electronic top-up, pharmaceutical, book, publication, tobacco, and lottery products, among others. Logista counts on a team of highly qualified professionals made up of 5,900 direct employees and 15,000 collaborators, focussed on providing service to their clients in the most efficient way and adapting to their needs.

About the Spanish Association Against Cancer

The Spanish Association Against Cancer (AECC) has been the flagship institution in the fight against cancer for 68 years. It is in its very nature to be close to people, so its work is aimed at helping them prevent cancer; being with them and their families throughout the whole process of the disease when diagnosed; and improving their future prospects by promoting cancer research. Today, it is the social and private entity that allocates the most funds to cancer research: 79 million euros in 400 projects, in which more than 1,000 researchers participate.

Organized into 52 Provincial Headquarters, and present in more than 2,000 Spanish towns/cities, it can count on almost 30,000 volunteers, more than 500,000 members and nearly 1,000 professionals. During 2020, the Spanish Association Against Cancer has attended to 105,196 people affected by the disease.